The Anglican Church in the Diocese of Trinidad and Tobago

The Cathedral Church of the Holy Trinity

Choose your topic of interest below ▼

30 A Abercromby Street, Port-of-Spain, Republic of Trinidad and Tobago, W.I.

“We Equip God’s People for Mission and Ministry”

Deans & Rectors of the Cathedral of the Holy Trinity

The History of the Cathedral of the Holy Trinity

The Cathedral Church of the Holy Trinity which is the mother church in the Anglican Diocese of Trinidad and Tobago stands majestically in the heart of the capital city of Port-of-Spain.  Since its consecration in 1823, this building has been a geographical icon and a national landmark of Trinidad and Tobago.

The first Anglican Church, known simply as the Trinity Church, was a modest wooden building on the corner of Prince and Frederick Streets.  In 1808, a great fire swept through the city, destroying every public building, including the church.  In 1809, the British Crown granted money for the construction of the new church.  The construction was started in Brunswick Square (now Woodford Square), but there were objections from the public resulting in a halt to construction.

On May 30th 1816, the cornerstone of the Trinity Cathedral was laid in its current location on 30A Abercromby Street, Port-of-Spain.  Architecturally, the Cathedral reflects the late Gregorian style mixed with the Gothic, as well as elements of the Victorian Age.  The layout was designed by the Colonial Secretary, Philip Reingale.  The magnificent hammer-beam roof is made of local wood and characterized by huge trusses.  The altar is built entirely of selected local mahogany and backed by alabaster and marble mounted on a base of Portland stone.  The stained glass windows showcase magnificent representations of the saints.  The Cathedral is filled with interesting historical items, such as the marble statue dedicated to former Governor and founder of the Church, Sir Ralph Woodford.  Along the walls inside the Cathedral are tablets placed “in memory of” former members of the British elite of colonial days.  The Cathedral of the Most Holy Trinity was consecrated on Trinity Sunday, May 25th, 1823.

The Labyrinth and the Garden of Peace 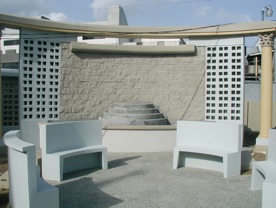 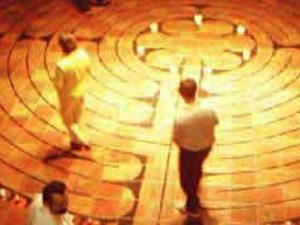 The Labyrinth and The Garden of Peace are now well established as sacred spaces of Holy Trinity Cathedral in Port-of-Spain, Trinidad.  The history of these sacred spaces is linked to two Anglican anniversaries which were celebrated in 1998. That year marked the 175th anniversary of the Parish Church of Holy Trinity, and, the 125th anniversary of The Anglican Diocese of Trinidad and Tobago.

Dean Knolly Clarke initiated The 175th Anniversary Committee under the chairmanship of Dr. Alan Patrick. In the course of the Cathedral’s celebration, Bishop Rawle Douglin invited Dr. Patrick to extend his chairmanship to the 125th Anniversary Committee of The Anglican Diocese of Trinidad and Tobago. Both committees highlighted the Church’s contribution to this country especially in the areas of Arts, Education and Social Outreach. It was felt that the success of these celebrations should motivate the Church to face the challenges of the future.

At that time, the world was on the eve of the 21st century which signaled enormous cultural changes through the advancement of information and communication technologies. Already, there were two major shifts in the culture of Trinidad and Tobago. With regard to religion, the country still respected rituals, but more people were embracing life as a personal walk with God.  This shift led to the construction of the Labyrinth as a sacred space for private prayer. With regard to final rites, there was also a major shift in the thinking of our national public. The society was becoming more open to cremation and the interment of remains in beautiful sacred spaces. This was the impetus for the construction of The Garden of Peace on the Cathedral Grounds.

The organ was originally installed in 1914 and was built by J.W. Walker and Company, a prominent UK organ builder. It is a three (3) manual (keyboard) instrument with pedals and the variety of stops gives it great versatility in accompanying small, intimate acts of worship and large Diocesan and Civic Services in the Cathedral as well as being a superb recital instrument.

In 2010 the Cathedral authorities embarked on an ambitious programme to have the organ completely re-furbished and rebuilt, and this process is ongoing. The pipework and inner workings of the instrument were cleaned and replaced and repaired, and the new ‘detached’ console (the part of the instrument which the organist plays) has been installed. Thus, we now have a fine instrument which employs the latest in modern technology, including fibre optics, combined with original pipe-work which is now over a century old. We are most grateful for the advice, expertise and skill of Mr. David Burke of Burke Organ Builders of Barbados who has diligently and expertly seen this project through to fruition. It is interesting to note that Mr. Burke was originally trained by Walkers UK who originally built the instrument.

There is still work to be done to enhance and expand the organ. It is also vital that the instrument is regularly maintained and tuned to keep it in pristine condition. This should ensure that its ‘life’ continues well into the next century.